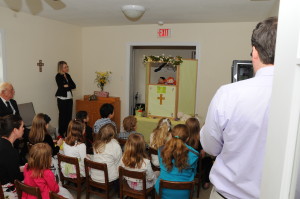 We start out the new year by continuing our live online interactive Sunday School meetings each Sunday morning, 9:45-10:15 a.m. This is a great opportunity for children to talk, pray, and study with one another. If you do not have a link to access online Sunday School materials and live sessions but would like to have access, let the church office know. With the link, you also get access to specially designed crafts, worksheets, coloring pages, parent pages, and videos.

In December, we had the following lessons from Exodus, Numbers, and Joshua:

In January, our lessons come from the books of Joshua, Judges, Ruth, and 1 Samuel. The lesson descriptions and accompanying Bible verses are:

Thank you to all of those who help children log in to these online sessions on Sundays! Please don’t hesitate to reach out for help accessing our online meetings as needed.